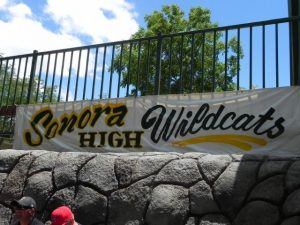 Sonora Athletic Director Rick Francis says that a proposal for all of Sonora’s sports teams except football to join with the Mother Lode League was rejected 6-0 by the league last year. The current proposal comes from the Section office. Also proposed, due to increasing in size and league dominance, is that Oakdale move out of the Valley Oak League.

Francis cites Sonora’s declining enrollment stating; “Enrollment will be under 1,000 in 2014-2015 and in the Valley Oak League most of the teams range from 1,300 all the way to 1,700” The current Valley Oak teams are East Union, Kimball, Lathrop, Manteca, Oakdale, Sierra, and Weston Ranch.

All proposals will be reviewed at a January 29th meeting in Stockton.

Francis believes that the Mother Lode League is a good fit because “we are all foothill kids… except Linden, but they are farm kids and we are all pretty competitive.”

Francis said he has not talked with the athletic directors of the other Mother Lode League schools yet. He said all the coaching staff get along but he has heard that the smaller schools, Amador, Argonaut, Bret Harte, Linden and Summerville (each with slightly more than half the enrollment of Sonora and Calaveras), don’t want to compete only for third place. Francis noted that the teams seem evenly matched to him. As an example he stated in boys basketball “Summerville beat [Sonora] twice, split with Bret Hart and beat Calaveras in a close game.”

He also says a 27% decrease in Sonora’s travel budget is another reason to make the switch but said it could increase the other school’s travel costs.

Several meetings after January’s will be held to introduce counter proposals. A final decision is not expected until April. If a realignment does happen it will be two years until a different arrangement can be proposed.