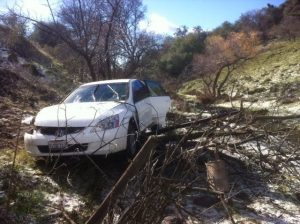 Jamestown, CA — We now know the name of the elderly couple injured in yesterday’s crash during the quick hail storm in Tuolumne County. 78 year old Walter and 69 year old Diana Nagano of Atwater were both injured in the crash on Highway 120 near O’Byrnes Ferry Road just after noon Thursday.


The CHP reports the couples’ 2003 Honda Accord spun-off the road, went through a barbed wire fence, went 75 feet down an embankment and smashed into a tree. They told officers the roadway went from wet to ice in a matter of seconds after the hail started to fall.

Walter was taken by air ambulance to Modesto Memorial suffering from a cut to the head with neck and back pain. The CHP says Diana complained of rib pain, but refused medical attention.