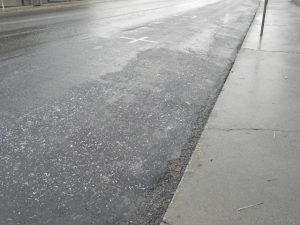 Tuolumne County, CA – Don’t let the sunshine deceive you. The CHP reports there have already been nine crashes and many spin outs on area roads since yesterday’s storm system.

CHP Officer Nick Norton says, “There were a few locations where we had four or five vehicles, like up on Hunts Road, which had spun out. On Lyons Bald Mountain Road, we had an average of ten or so cars that spun out at different times. There was even a Semi-truck that jack-knifed closing down the roadway for about an hour. There were no injuries, just property damage.”


The CHP warns the roadways will be slick in some areas on your evening commute and over the weekend thanks to our cold temperatures.

Norton says, “Any of those areas that don’t dry up today are still going to be very slick tonight and Saturday morning because they are going to freeze up. So we urge motorists to drive with caution.”

In Calaveras County, the San Andreas CHP says they had a quiet night and morning with only one accident up by Big Tree Park due to the wet, slick roads. Luckily no one was injured in that crash.