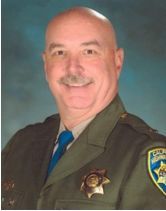 San Andreas, CA — The San Andreas CHP has a new top cop and he’s a 25 year veteran on the force. Lieutenant Dewayne Lewis has taken over as the new Commander of the San Andreas office and will oversee 27 employees. Lewis transfered from the South Sacramento CHP.

Lt. Commander Dewayne Lewis says, “I’m looking forward to becoming part of this community. I plan to be actively involved in the community and making sure we are doing the best that we can to serve the public.” Lewis urges community feedback as well.

Lewis says a top priority is to educate people on the dangers distracted driving, like texting and driving, as well as DUI driving while under prescription drugs. He says both are becoming big problems and will be an “enforcement priority” under his watch.

Lewis has worked in Santa Barbara, Indio, and at the CHP Academy in West Sacramento. He has also worked in the CHP’s Emergency Notification and Tactical Alert Center, which is responsible for AMBER Alerts. Lewis was promoted to Lieutenant in 2008 and was assigned to the CHP Academy overseeing cadet training.

Lewis replaces outgoing Lieutenant Josh Ehlers who was transferred to the Office of the Commissioner in the Sacramento Area.