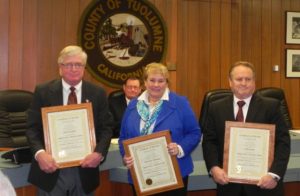 Sonora, CA — The swearing in ceremony for three Tuolumne County Board of Supervisors was held during the noon hour today.

Taking the oath of office are: Sherri Brennan replacing Liz Bass in District One, Karl Rodefer in for retiring Dick Pland in District Five, and John Grey was sworn in again for District Four.

Presiding Judge Eric DuTemple administered the oath of office. Later, the Board of Supervisors presented the Judge DuTemple with a proclimation of thanks for his 40 years of service to the Tuolumne County justice system. DuTemple recently announced his plans to retire.