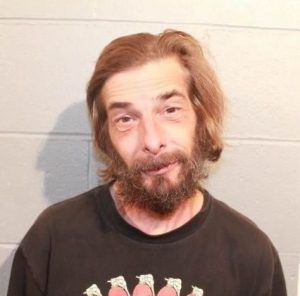 Angels Camp, CA — A man was arrested in Angels Camp over the weekend for causing a disturbance at a local grocery store.

The Police Department received a call yesterday afternoon that an intoxicated man was “touching children inside the store.” 46-year-old John Leon Dyken allegedly went up and started “tickling” two toddlers at the Angels Camp Save Mart. The mother was in distress, so the manager approached Dyken and asked him to leave. The mother does not know Dyken, and told the store manager she has no idea why he touched her children.

Angels Camp Police Officers arrived to talk with Dyken and he then attempted to leave. There was a short physical fight, and Dyken was then placed in handcuffs.

Dyken was arrested on charges of annoying/molesting children, resisting arrest, intoxication, and bringing narcotics into jail (During the booking process Dyken brought some tobacco into the jail that was mixed with marijuana).

The Police Department would like to interview the woman that was shopping with her two children that was approached by Dyken. She had left the store by the time officers arrived.

The Police Department notes that earlier in the day, officers responded to the Angels Camp Burger King because a man, matching Dyken’s description, displayed a knife. They are investigating whether both incidents are connected to Dyken.

Dyken does not have a permanent address, but has reportedly been living in the Angels Camp area.