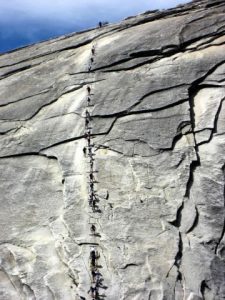 Yosemite, CA — Yosemite National Park has adopted the preferred alternative of the Half Dome Stewardship Environmental Assessment report. It will allow 300 visitors a day to climb the popular Half Dome Trail which includes the use of the Half Dome cables from May to October.


Park Ranger Scott Gediman says, “Through this environmental planning process we’ve basically come up with a final number of 300 per day which is about as many as we had last year, 2012. It’s a decrease from no permits at all, but it’s consistent with what we have done in the past couple of years. Gediman adds, “It is what we feel is the balance between access to the cables and not creating hazardous crowding and safety conditions.”

During a 52-day public comment period in March of 2012 the park got a total of 1,649 comment letters including one from the Tuolumne County Supervisors opposing the 300 a day cap. Click here to view an earlier story on that letter.

Applications for permits to hike the trail are available from March 1 through March 31, 2013. The park will give out permits through a preseason lottery and a two-day in advance lottery.