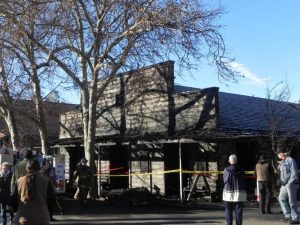 The Columbia House Restaurant sustained major damage due to fire on Sunday night.


The President of the Columbia Chamber of Commerce, Gary Neubert, was Wednesday’s “Newsmaker of the Day”.


Witnesses started calling the Tuolumne County Sheriff’s Office at around 6:20pm Sunday stating that a man was causing a disturbance in Columbia State Historic Park, and “attempting to light something on fire.”

Sgt. Jeff Wilson of the Sheriff’s Office says 21-year-old Daenon Vincent Brewer of Tuolumne was identified as a suspect by witnesses and arrested in connection.

“It was determined that Brewer forced entry into the front door of the restaurant and lit a Christmas Tree on fire,” says Sgt. Wilson. “Brewer was arrested and charged with arson, burglary, violating probation, being drunk in public, and possession of marijuana.”

The Columbia House Restaurant received heavy damage, but the structure is still standing. Most of the adjacent Angelo’s Hall survived undamaged.

The restaurant is located at 22738 Main Street in Columbia State Historic Park.

Over the past couple of years, the restaurant was known as Black Bart’s Skillet and The Jenny Lind Restaurant.

The Columbia House was purchased last year by the Kwasnicki family, along with the Jack Douglass Saloon and the Pioneer Emporium.

According to Nuebert, the immediate impact on tourism and the local economic impact for Columbia will be minimal. Tourism tends to run lower during the month of January than it does during the summer.

However, Nuebert is also urging the state (which runs the State Park) to expedite working with the insurance company to allow work on the building to begin immediately, so that the restaurant can be restored and re-opened by summer.

Neubert encourages the public to support the Kwasnickis, who recently moved from the bay area to the Mother Lode to directly help run their Columbia businesses.


For more information about the Columbia Chamber and the numerous events that take place in Columbia, log onto http://columbiacalifornia.com/