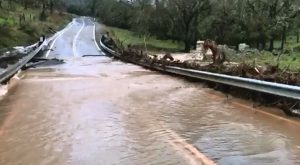 The National Weather Service has issued a Winter Storm Warning for the Sierra Nevada above 6,000 feet, through 10 AM Thursday.

Total snow accumulations of one to four feet are expected above the 7,000 foot elevation.

Winds could gust as high as fifty to fifty-five mph.

Additionally, a Flash Flood Watch has been issued for the Sierra Nevada from 10 AM this morning through late Wednesday night.

And a Flood Watch has been issued for the Mother Lode and the Northern San Joaquin Valley from this afternoon through Thursday morning.

Heavy rainfall can be expected over much of the area through Wednesday night. The combination of rain and rapidly melting snow over the higher elevations of the Sierra will increase the threat of potentially serious flooding, especially at elevations below 7,000 feet.

Rising waters can be expected along many rivers and streams through Thursday morning with the possibility of substantial flooding in the foothills. With already saturated soils, the additional rain will also increase the flooding potential.

Periods of light to moderate snow showers will continue Thursday into Friday as the snow levels will lower into the Mother Lode.

A Flash Flood Watch means that conditions may develop that lead to flash flooding. Flash flooding is a VERY DANGEROUS SITUATION. You should monitor later forecasts and be prepared to take action should Flash Flood Warnings be issued.