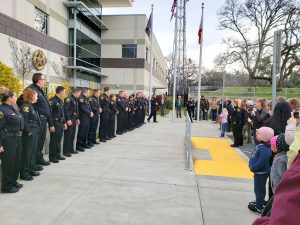 San Andreas, CA – A long line of uniformed men and women stood at attention as Calaveras County Sheriff Rick DiBasilio saluted the new hires and those being promoted within his office.

The “Promotional/Hiring/Affirmation of Office Ceremony” was held outside the sheriff’s office located at 1045 Jeff Tuttle Drive in San Andreas on Monday at 9 a.m. The same building that houses the Calaveras County Jail. The line of 26 uniformed deputies and correctional officers were all smiles as family members and friends, beaming with pride, clapped and cheered as the sheriff read the oath and welcomed the new members to his team.

The sheriff’s office provided this list of new hires: