Car Ignites On Fire Near Groveland After Hitting Gas Pump 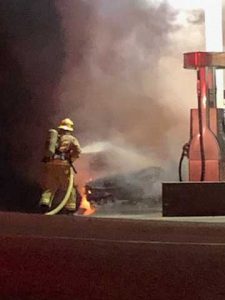 Sonora, CA — The CHP reports that a person was arrested for DUI following an early morning incident on Highway 120 in the Big Oak Flat area.

It happened shortly after 1am at the Claim Jumpers Outpost. A car reportedly hit a gas pump, and the vehicle then ignited on fire. Details are still limited, but the CHP reports that an arrest was made for DUI. The name of the person has not been released. There were no reports of any notable injuries resulting from the crash. Firefighters responded to extinguish the blaze.