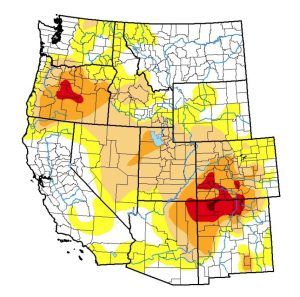 Sonora, CA — The US Drought Monitor has released a new report showing that only 34-percent of California remains in a moderate to severe state of drought.

Three months ago, three-quarters of the state was in the drought category, but conditions are much more favorable following the heavy rain and snow received. We reported earlier this week that the Sierra Nevada snowpack was about 145-percent of average for this time of year.

The remaining drought impacted areas are confined to the far northern end of the state, and parts of southern California. It is noted that the next chance for precipitation is late this weekend and early next week.

The US Drought monitor makes its drought determination based on precipitation received and soil conditions.