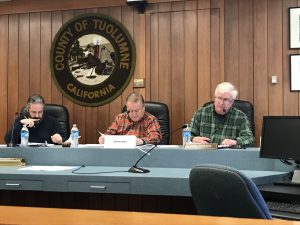 Sonora, CA — The Tuolumne County Economic Development Authority Board of Directors is moving toward having the TCEDA mostly dissolved by the end of March.

The board met this morning at the county government building in downtown Sonora for the first time since both the county supervisors and Sonora City Council both voted to pull out of the joint powers agreement.

The county and city have chosen to go their own way when it comes to supporting and attracting economic development, and details will be worked out by those respective government entities over the months ahead.

The TCEDA Board, made up of two county supervisors, two city council members, and three at-large members, asked Director Larry Cope to begin the process of terminating all leases and contracts, cataloging all TCEDA property, canceling upcoming trade show trips and developing a proposed plan for distributing TCEDA records.

After those business items were addressed, the board went into closed session for nearly an hour to discuss an unidentified potential lawsuit, as well as Cope’s contract. At the end of the closed session, the board reconvened, and Chairman John Gray announced that they had voted to give written notice to Cope, intending to terminate his contract. It was noted that the date and terms would be negotiated between Cope, and the TCEDA’s representatives, County Counsel Sarah Carrillo and HR Director Ann Fremd. Cope will remain Executive Director during the upcoming wind down period.

Afterwards, Cope respectfully declined to comment about his plans moving forward, or his reaction to the decision.