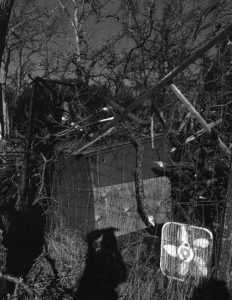 Damage to livestock shelters at the Wildcat Ranch

Sonora, CA – Last week’s storms packed a punch and brought down several trees that damaged not only parts of Sonora High’s campus, but also other district properties.

At a special meeting tonight the board of trustees voted on a resolution to authorize contracts for immediate repairs. Superintendent Dr. Mark Miller explains, “This is about turning expenses over to our insurance and then being able to get a contractor to do the work to repair our storm damage. Because it was one storm we need to include all the damage that was done that day.”

As reported here last Wednesday, February 13, originally Superintendent Miller reported damage to the maintenance building after a tree came crashing through its roof early that morning. However, upon further review additional areas were found to have been harmed. They include tree damage to the football equipment shed, scoreboard, fencing and gutters on the Sonora campus. The Cassina High School campus had roof, fence, gutter and damage from trees. The softball scoreboard was damaged by high winds. On the Wildcat Ranch over a dozen trees came down causing damage to its livestock shelters and fencing.

No injuries were reported as school was called off that day due to the bad weather and Miller shares, “It was all just property damage, thank goodness. If that had happened during the day with our maintenance people doing work in that shop we could be having a whole different discussion.”

Miller estimates the repair costs will run several tens of thousands of dollars and hopes to have them completed in about a month.