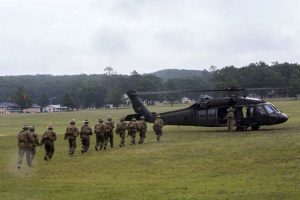 South Lake Tahoe Area, CA — During high winds on Tuesday, February 12th, Alpine County Search and Rescue personnel helped an skier injured in an avalanche on the north east side of Jobs Peak.

The Alpine County Sheriff’s Office reports at noon the information provided to them by cell phone from a friend of a skier who was injured in an avalanche was not good. The injured skier caused an avalanche described as 50 feet wide and 800 feet long. The friend of the injured skier reported the injury was a lower leg compound fracture and they were showing signs of hypothermia. Once the exact location of the injured skier was determined, Alpine County Search and Rescue members responded on cross country skis and snowshoes. The terrain was steep with deep snow and the potential for additional avalanches in the area was significant. Air operations were not feasible due to extremely high winds.

Just over three hours later Search and Rescue members contacted the injured skier and began preparing for a very arduous ground transport. At about 6:00 pm, as seen in the brief video taken by Deputy Green the injured skier was able to be hoisted by an Air National Guard Black Hawk helicopter and taken to a designated landing zone where Douglas County East Fork Fire and Paramedic personnel provided assistance.

The friend of the injured skier posted his account of the incident here stating “We were fortunate that we had cell reception and accurate GPS the entire time.” and also that “Having a bivi bag, not just a space blanket, is essential for warmth and transportation. Have extra clothes, warm liquid, and a helmet.”