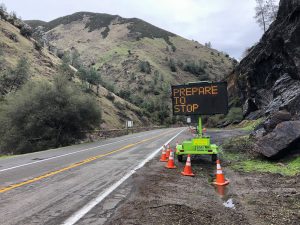 For public safety reasons, beginning at 3 p.m. today, Caltrans announced that it will pre-emptively close a 17-mile stretch of Highway 140 between Bear Creek near Midpines and Foresta Road in El Portal, located about four miles west of the Yosemite National Park entrance.

Caltrans closed this area in October and January as it still poses risks for debris and mudslides due to damage from last summer’s Ferguson Fire. It is uncertain when the roadway will reopen as the storm activities must first pass before crews can clear and then inspect the area before reopening it.

Yosemite National Park officials alerted employees today that they anticipate the road will remain closed through Thursday morning, adding that Weather and Safety Leave was approved for eligible employees in Yosemite Valley and El Portal who commute via Highway 140 today and tomorrow morning.