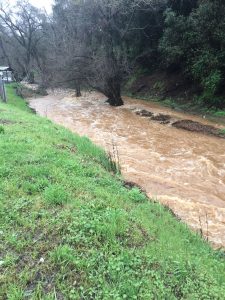 A Flood Watch has been issued for the Sierra Nevada, the Mother Lode and the Northern San Joaquin Valley from late tonight through Thursday afternoon.

Light to moderate rain will begin this evening. Heavy rain will overspread the area Wednesday afternoon and persist through Thursday morning.

Total rainfall amounts will range from one to two inches in the Central Valley. Two to four inches of rain is likely in the Mother Lode and the lower portions of the Sierra Nevada.

The rain on top of snow will create flooding concerns for areas below 5,000 feet.

Rivers and streams will rise on Wednesday as the rain increases through the day. Street flooding and mudslides are possible.

Additionally, the National Weather Service has issued a Winter Storm Watch for the Sierra Nevada above 4,000 feet, from late tonight through Thursday afternoon.

Total snow accumulations will range from one to seven feet above the 5,000 foot elevation. The higher you go, the more the snow.

Winds could gust as high as seventy mph above 9,000 feet.

Finally, a Wind Advisory is in effect for the Northern San Joaquin Valley on Wednesday from 4 AM to 4 PM.

Winds will be twenty to thirty mph with gusts ranging from forty to fifty mph.