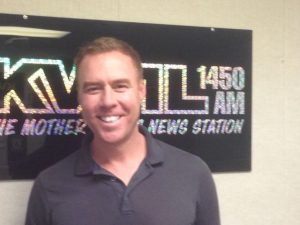 Josh Pfeiffer is an American singer, songwriter, entrepreneur, and philanthropist with roots in the Mother Lode.

Pfeiffer was Wednesday’s KVML “Newsmaker of the Day”.

He was born in Sonora, California and attended Summerville High School. He and his wife, Tara Pfeiffer, have three children and left their Lake Tulloch home in Copperopolis around four years ago to live in both downtown Reno and in Sacramento.

Last year, Pfeiffer re-released his single Life in the Pop genre, and donated six months of the proceeds from the single and music video to the victims of the Northern California Wildfires.

Pfeiffer also spent time in the studio working on his latest original compositions, “One More Time” and “Dancing Girl”, as well as a studio version of Frank Sinatra’s “Luck Be A Lady”.

This Thursday night, Pfeiffer will return to the Mother Lode to perform a free ‘Valentines Show’ inside of the Willow Creek Lounge at Black Oak Casino, beginning at 8 PM. The audience can expect lots of standard love songs ranging from big band tunes to a few of the more contemporary artists like Michael Buble. Additionally, Pfeiffer will sing a few of his original songs.

“It’s going to be a fun night, a romantic night and I’m looking forward to returning home to perform,” said Pfeiffer.