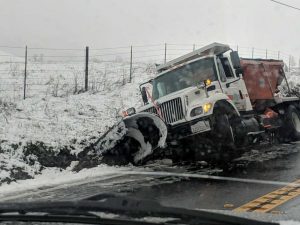 Snowplow On The Side Of The Road

Update at 3:52pm: Sonora CHP officials are providing traffic control on Highway 108 near Old Strawberry Road due to a stuck big rig.

They add that three trees are across the roadway on Belleview Road near Acorn Drive by the Tuolumne Fire Station.

San Andreas CHP officials report lines down on Highway 26 just east of Ridge Road, which is impacting travel. Also, on Highway 4 about a mile west of Boards Crossing Road, a snowplow is involved in a collision.

Updated at 3:08pm: The stormy conditions are contributing to more traffic-related mayhem around the Mother Lode.

San Andreas CHP officials are reporting a two-vehicle accident on Highway 12 just west of Highway 49 in San Andreas, which is blocking both lanes. There is also a solo crash in Angels Camp on the Highway Rolleri Bypass Road.

In the Crystal Falls area, a downed power line is reported on West American River Drive near Eel River Drive and a road hazard also reported in the 21,700 block of Crystal Lake Drive.

In the Columbia Village-Springfield area police are on the scene of a reported vehicle into a house on Springfield Road near Horeshoe Bend.

Update at 2:02pm: The CHP Sonora Unit reports a tree down across all lanes of Black Oak Road near Overlook Drive that is requiring a hard closure of that roadway.

Officials also say there is a vehicle blocking the roadway on Highway 108 near Confidence Road and another hazard without further details on 108 near Beardsley Reservoir Road.

The CHP San Andreas Unit reports that Highway 4 is closed two miles east of Murphys for a power pole and lines down. Traffic in the area is being diverted through Murphys.

Update at 1:05pm: In Calaveras County, the CHP reports on Highway 4 near Manzanita Drive just east of Murphys a pole and lines down in the eastbound lane.

In Tuolumne County, a downed tree is blocking all lanes in the 19,300 block of Cherokee Road near Tuolumne. There’s also a power line down in the 20,600 block of Lower Hillview Drive in Scenic View.

Chain requirements remain down low in foothills communities like Sonora, Murphys and Pine Grove. Caltrans emphasizes that Highway 88 remains closed from Ham’s Station west of Kirkwood to Pickett’s Junction/SR-89 with no estimated time of opening due to heavy snow, blizzard conditions and avalanche control.

The US National Weather Service Sacramento California indicates that scattered snow showers will continue impacting mountain/foothill locations today with snow levels as low as 1,000 feet as storm exits the region.

Update at 12:15pm: In Calaveras County, along Bummerville Road, near Bald Mountain Road, there is a PG&E powerpole, with lines across the road.

Update at 11:15am: There is a new crash on Highway 4 near Telegraph Road in Calaveras County. There is a mud and rock slide on Mountain Ranch Road near Calaveritas Road. In Tuolumne County, on Pine Street near Rozier Avenue, there are power lines in the roadway. On Phoenix Lake Road, near Ridgewood Drive, there is a 50 ft. tree in the roadway. There are defective traffic signals on Highway 108 near lower Mono Way. The Sonora Police Department reports that Lyons Street is still closed due to a large tree in the roadway. The road is blocked between Hope Lane and Bald Mountain Road.

Update at 10:30am: To get a sense of what downtown Sonora was like with the snow during the seven o’clock hour this morning, click here to find a video.

Update at 9:35am: The Sonora Police Department reports that Lyons Street is closed due to a large tree in the roadway. The road is blocked between Hope Lane and Bald Mountain Road.

Vehicles are continuing to get stuck in the snow on Tuolumne Road near Lambert Lake Road and Westside Road. The CHP is on scene providing traffic control.

A vehicle is also stuck on Wasatch Mountain Road near Crystal Lake Drive.

Update at 8:10am: The CHP reports that the roads in the region continue to be hazardous. Some new traffic hazards to be aware of include vehicles getting stuck on Highway 108 near Stockton Road, a big rig stuck on Tuolumne Road near Mono Way, utility or power lines across the 23000 block of Confidence South Fork Road, A vehicle stuck on Greenley Road near Cabezut, a spinout on Lyons Bald Mountain Road near Greenley Road, a tree down in the 21000 block of Phoenix Lake Road, three big rig trucks stuck on Jamestown Road near Golf Links Road, and trees down across Tuolumne Road near Cherry Valley Blvd.

Avoid travel this morning if possible.

Original story posted at 7am: Sonora, CA — The winter storm system is resulting in downed trees and vehicles stuck in the snow.

On Lime Kiln Road, near the Highway 108 intersection, a big rig truck spun out, and it caused two other big rigs to jackknife. A big rig is also reportedly stuck on Highway 108 at the Stockton Road off-ramp.

On Tuolumne Road, near Cherokee Road, a tree is blocking one of the traffic lanes. A tree is also blocking both lanes of Black Oak Road near Beauchamp Drive.

On Highway 49 near Fraguero Road an SUV has become stuck. Cars also getting stuck in the snow on Rawhide Road near French Flat Road, on Highway 120, near Old Big Oak Flat Road, and Mono Way at Jenness Road.

Vehicles are sliding off Tuolumne Road near Woodham Carne Road.

All roads heading into Yosemite National Park are closed due to heavy snow accumulation and downed trees. It includes the Highway 120 entrance.

In Calaveras County, a tree is blocking both lanes of Independence Road near Liberty Hill Road. In addition, vehicles are getting stuck on Highway 26 near Three Cent Road.