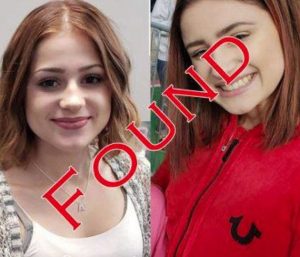 San Andreas, CA – A teenager has been reunited with her family after she was reported missing from her Mountain Ranch home nearly two weeks ago.

16-year-old Kayla Faith Black was last seen on Sunday, January 6th as reported to the Calaveras County Sheriff’s Department by her family. At the time, investigators reported that they believed she was picked up by an unknown person from the rural home.

After five days of investigating, detectives decided to take the case to the public, as reported here. A couple of pictures along with her description and details of her disappearance were released.  Detectives also acknowledged that Black has a history of mental health issues and that she was considered a runaway.

A tip by what detectives call an “observant citizen” led to her whereabouts this past Friday. The person reported seeing her in the San Andreas area and after a brief search she was located. Sheriff’s officials would not release any details as to exactly where she was found or whether anyone was with her stating that no further information is being released at this time.