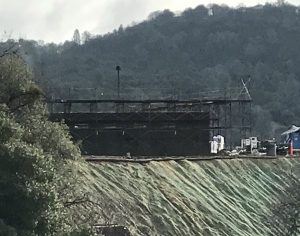 Sonora, CA — By this time next year the new Tuolumne County Jail under construction could be receiving inmates.

Clarke Broadcasting asked Sheriff Bill Pooley about how things are coming along, and he commented, “The walls are going up, the doors are in, and the windows are starting to go in. It is very exciting. We hope that construction will be done in October or November of this year and to be occupying the building this time next year.”

Once the construction is finished the sheriff’s office has 90 days to transition and occupy the new building, and staff will be trained on the various new mechanisms. The new jail, at 63,000 sq. ft., will be nearly double the size of the current facility, which is 31,157 sq. ft. It will house up to 240 inmates, compared to 147 at the existing location.

The future jail will have eight different housing areas for various classifications of inmates, something not possible at the current jail.

$33-million of the $40-million project costs are being covered by state grant dollars. Harris Construction, based in Fresno, is overseeing the work.

Near the jail construction is a sign up for the future Tuolumne County Courthouse. It notes that Turner Construction Company will be the lead contractor. State funding was included in last year’s budget for the $69-million courthouse project. The 61,537 sq. ft. facility will house five courtrooms. It is a state project, as opposed to the jail, which is being overseen by the county. Pooley says he has learned that construction on the courthouse will start late this month.