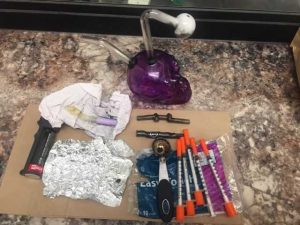 Jamestown, CA – A probation compliance check on a Jamestown woman netted drugs, which then landed herself, her boyfriend and a friend behind bars.

On Tuesday afternoon, the High Risk Probation Team made a probation compliance check at a home on Fourth Avenue in Jamestown.  The resident, 26-year-old Stormi Breseman, and her boyfriend 26-year-old Dillan Rivera live in the home. She is on felony searchable probation. Rivera is also on parole.

A search of the home turned up drug paraphernalia and pepper spray, which neither is allowed to have since they are felons, according to Tuolumne County Sheriff’s spokesperson Andrea Benson. She adds that a third person in the home, 26-year-old Cody Crosby, was also found to have heroin on him.  All three were arrested. Breseman and Rivera’s bails were set at $10,000 while Cody’s is $5,000.