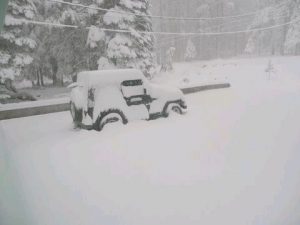 A pair of weather systems will move through the region, spreading heavy snowfall accumulations to the Sierra Nevada.

The winter storm currently moving through, should wind down by late Wednesday morning with a brief lull ahead of the much more impactful disturbance.

A Winter Storm Warning for the Sierra Nevada above 5,000 feet, is now in effect until 4 AM Friday.

Additionally, a rare Blizzard Warning has been issued for the Sierra Nevada above 6,500 feet, from 7 PM Wednesday through 7 AM Thursday.

Between 5,000 and 6,500 feet, total snow accumulations will range between four inches to four feet.

Winds gusting to as high as seventy-five mph, will cause blizzard/whiteout conditions in blowing snow.

The combination of a heavy, wet snow with high winds may down power lines and trees. Be prepared for significant reductions in visibility at times.

Significant drifting of the snow is also likely. Travel will be dangerous and is not advised.

Additionally, a High Wind Watch has been issued for the Mother Lode and the Northern San Joaquin Valley, from Wednesday afternoon through late Wednesday night.

Winds of twenty-five to thirty-five mph are expected, with gusts ranging up to sixty mph.

Also, a Flood Watch remains in effect for both the Mother Lode and the Northern San Joaquin Valley, from Wednesday afternoon through Thursday morning.

Rainfall amounts of one to three inches are possible in the Central Valley. Up to seven inches of rain is forecast for the Mother Lode.

Finally, a Flash Flood Watch has been issued for the Sierra Nevada below 7,000 feet, from Wednesday afternoon through Thursday evening.

Heavy rain may lead to excessive runoff, rising water levels on area rivers and streams and present the threat of flash flooding.