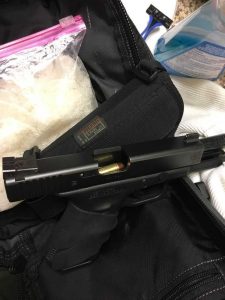 Tuolumne, CA — An alleged drug dealer was busted over the weekend in Tuolumne County. The Sheriff’s Office reports that on Saturday afternoon a deputy spotted a 24-year-old wanted man, Armando Gonzalez of Jamestown, running from an SUV at the Tuolumne Apartments. Gonzalez had several felony and misdemeanor warrants for his arrest and fled from the deputy into one of the apartments.

When speaking to a resident at the door of the apartment, Gonzalez escaped through a window and led deputies on a foot chase. Gonzalez was quickly captured and continued to resist arrest until he was secured in handcuffs.

A search of Gonzalez and his belongings turned up more than a pound of methamphetamine, an ounce of heroin, two loaded firearms; one of which was reported stolen out of Modesto and evidence of drug sales. He was booked into Tuolumne County Jail.