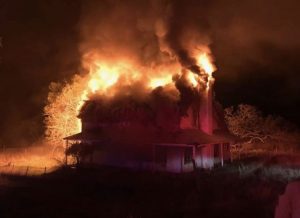 Jamestown, CA — Firefighters battled a vacant house fire in the Jamestown area that shutdown a section of Highway 108 for several hours last night and severely damaged the home.

When firefighters arrived on the scene, the structure was fully engulfed with flames shooting out of the roof as can be seen in the pictures in the image box. As reported here Friday night, the house is located in the 17400 block of Highway 108 across from Hurst Ranch. Firefighters were able to keep the flames from spreading to any nearby vegetation.

Tuolumne County Sheriff’s Office spokesperson Sgt. Andrea Benson relays that the highway was closed between High School and Bell Mooney roads for over three hours as crews knocked down the flames and then mopped up. The fire caused major damage to the home and it is unclear if anyone was in the house when the blaze ignited. Sgt. Benson did not know if the fire was considered suspicious as investigators are still trying to determine what sparked the flames.  The blaze broke out just before 9 p.m.