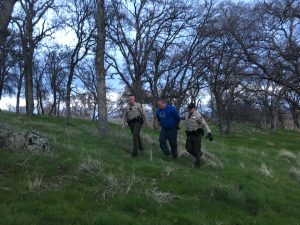 Jamestown, CA — A man that led Tuolumne County Sheriff’s Deputies on a high speed chase during the Friday evening commute and then fled on foot was taken down by K9 Beau.

The pursuit began on Highway 108 near O’Byrnes Ferry Road when a deputy tried to pull over a vehicle. The deputy reported that the driver was passing several vehicles illegally while reaching speeds of over 85 mph.  Sgt. Andrea Benson tells Clarke Broadcasting the chase ended at the lower lot of Chicken Ranch Casino in Jamestown when the driver suddenly pulled over. He jumped out of the vehicle and began running across a field. That is when K9 Beau caught up with him and helped deputies apprehend him.

Benson says the Sheriff’s office does not yet know why the suspect fled and she did not have the name of the suspect. The incident is still under investigation. We will bring you further details as soon as they come into the news center.