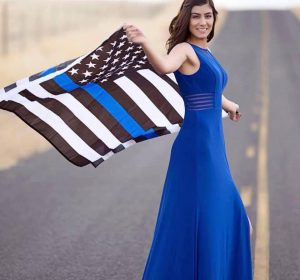 Davis, CA — The Tuolumne County Sheriff’s Office and Sonora Police Department are offering condolences following the tragic death of a police officer last night in the community of Davis near Sacramento.

A statement from the Tuolumne County Sheriff’s Office, via spokesperson Sgt. Andrea Benson, reads, “We are extremely saddened as we lose another fellow law enforcement officer. 22-year-old Davis Police Officer, Natalie Corona, was fatally shot after responding to a three-car traffic accident. The suspect was found in a home nearby with a self inflicted gunshot wound.”

A statement from the Sonora Police Department reads, “Our hearts are heavy for the family and the Davis law enforcement community…Prayers are with every law enforcement agency, and families of Officer Corona.”

Corona had just been sworn into office two weeks ago and had followed in her father’s footsteps to work in law enforcement. She was shot while responding to the crash in the city limits of Davis. Limited details are available. The name of the alleged shooter has not been released.