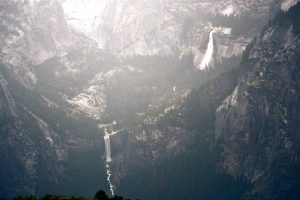 The Mariposa County Coroner’s Office relays that it was 32-year-old Joshua Brock Conner of Lakeview, Ohio. The Associated Press reports that Conner reportedly died of head injuries after slipping down Silver Apron, which is a sloping granite area above Nevada Fall. The area is located east of Yosemite Valley along the Merced River. Rangers responded to a 911 call regarding the incident and later found him in the water.