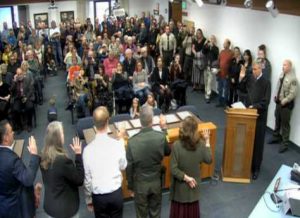 Sonora, CA — The Tuolumne County elected officials who were victorious during last year’s midterm election took the oath of office this afternoon.

Immediately after, the supervisors elected Karl Rodefer as the new chair for 2019 and Sherri Brennan the Vice Chair. Outgoing Chair John Gray stated, “It has been a very interesting year. This was my third time as chairman and this was probably the most difficult. I am really going to enjoy passing this along to supervisor Rodefer (audience laughter). I’m almost giddy.”

Supervisor Rodefer later added, “I want to welcome the new members the board and I’m looking forward to working with you all. I also whole heartedly second the nomination of Sherri Brennan to be the vice chair.”

Rodefer and Brennan were appointed to the leadership positions without any opposition. Today was a short special meeting of the board, and the first regular session will come in two weeks.