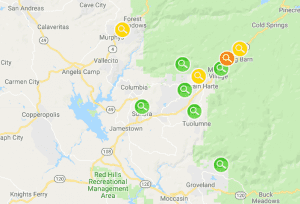 Update at 7:40am: PG&E is making progress restoring power in the Mother Lode this morning.

There are now only 56 remaining customers without electricity in the Long Barn area. Full restoration is now estimated to come around 3:30pm. Damaged equipment was found in the area.

It remains unclear when 61 customers near Confidence and 98 near Twain Harte will be restored. The 103 customers west of Murphys are still anticipated to be restored by 2pm.

Original story posted at 5:30am: Sonora, CA — Thousands are without power this morning in the wake of a storm system passing through the region.

PG&E reports that the largest outage is 862 customers spread between Mi Wuk Village and Long Barn. It started at 6:15pm yesterday and should be restored by around 8:30am. Faulty power equipment led to the outage, according to the company. Separate outages are also impacting 61 customers near Confidence and 98 customers in Twain Harte. It is unclear when those areas will be restored.

103 customers are without power west of Murphys. The cause is being investigated with the hope of fully restoring everyone there by two o’clock this afternoon. There are also smaller outages reported near Groveland, Tuolumne, Sonora and Valley Springs.

In addition, last night there was a Comcast internet outage impacting its enterprise business customers. The customers have been restored, and the company indicates that it was caused by a cut or damaged line.