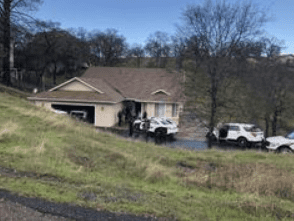 Copperopolis, CA — Two people were busted for breaking into a home in Copperopolis and stealing valuables from inside.

The Calaveras County Sheriff’s Office received a tip that people were possibly “squatting in the home” in the 4000 block of Edgewater Court. The owner was notified by officials, and confirmed that no one should be living at the residence. Deputies responded and learned that 44-year-old Larry Vannatta and 45-year-old Cathryn Walter had broken in and had been illegally residing at the home. The sheriff’s office also found that various memorabilia that had been stored inside (sports, Nascar and Disney related) was missing.

There was also a truck in the garage fully loaded with items from the house. The two suspects were charged with burglary, grand theft, vandalism and possession of methamphetamine. Vannatta was also charged with committing a felony while out on bail. An investigation is ongoing. Anyone with information about the incident, specifically the stolen items, should call the sheriff’s office at 209-754-6500.