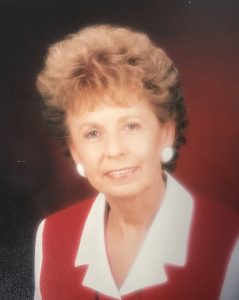 Sonora, CA — A former Mother Lode Fair Board member, business leader, and philanthropist, Joyce Martin, has passed away at the age of 84.

She and her husband, Joe Martin Jr., were married in 1953, and operated (T-5) Joe Martin Logging and Trucking and Ranches for nearly 50 years. The couple retired in 2000.

In addition to volunteering her time to the Mother Lode Fair Board, she was a member of the Tuolumne County Cowbells and Omega Nu. She and her husband, who passed away in 2013, were also both active in organizations like the Associated California Loggers, Sierra Cascade Logging Conference and the Tuolumne County Farm Bureau.

A celebration of life for Martin will be held at 11:30am, Friday, December 21st, at the Calvary Chapel of Sonora located at 19889 Soulsbyville Road.

You can read her entire obituary, submitted by her family, below.

Barbara Joyce Martin passed peacefully Monday, December 17, 2018 at her home with family at her side.

Joyce was born December 24, 1933 to Shirley and Laura Hutchins.  Joyce’s grandfather, William Hutchins, was one of the first settlers of what is now called Tamarack in Calaveras County and one of the founding members of the local Seventh Day Adventist Church.  Her father, Shirley, was a mason and rancher, residing in the valley below Twain Harte Lake along South Fork Road, where Joyce grew up.

Joyce married Joe Martin, Jr. in 1953.  Together Joyce and Joe operated Joe Martin Logging and Trucking (T-5) and Ranches for nearly 50 years, until their retirement in 2000.  The couple belonged to several industry-related organizations, such as the Associated California Loggers, Sierra Cascade Logging Conference, and the Tuolumne County Farm Bureau.  Joyce was a member of the Tuolumne County Cowbells, Omega Nu, and the Mother Lode Fair Board.  Joyce and Joe loved this local community and realized the importance of giving back through philanthropic endeavors.

Her family remembers her as a very loving mother, grandmother, and great-grandmother.  One distinctive quality most remember about Joyce was her ability and willingness to listen.  After spending time with her, people came away feeling uplifted and in better spirits.  Her non-judgmental acceptance of others was also valued and was a beautiful trait.

Joyce led a rich life with a close, loving family, along with several lifelong friends.  Joe and Joyce traveled thousands of miles across the United States and the world taking well-deserved vacations, often in the family airplane or motorhome.  One of Joyce’s favorite places, however, was Eagle Meadows, where she enjoyed the family cabin.

Joyce’s family is holding a Celebration of Life at 11:30 AM on Friday, December 21st at Calvary Chapel Sonora, located at 19889 Soulsbyville Road.  Remembrances can be sent to your favorite charity.