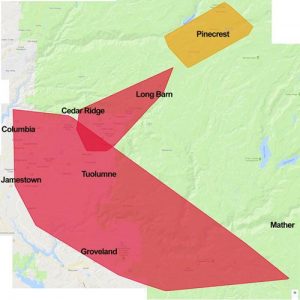 Update at 3 p.m.: PG&E released details surrounding the major power outage this morning impacting around 24,500 customers in the areas of  Sonora, Jamestown, Groveland, Long Barn, Columbia and Twain Harte. Company spokesperson Brandi Merlo notes that the outage was a result of a problem with scheduled maintenance. She explains, “It required the transferring of the electric grid in Tuolumne County to another source. When we were working to transfer that load we ran into an issue that resulted in the outage.” Merlo confirmed that about two hours later there was another outage that lasted about a minute as crews tried a second time to transfer the load.

Crews continued to work at the sight this afternoon as Merlo relays, “We transferred the load back to the original source and were working to make repairs in order to complete that previously scheduled work on another time.” She did not have a timeframe for when that might be.

Original post at 9 a.m.: Sonora, CA — An estimated 24,500 PG&E customers were without power in Tuolumne County for about 20 minutes shortly after 8:30 this morning.

PG&E spokesperson Brandi Merlo notes that it is likely a transmission level related issue due to the sheer size of the outage, but she notes that the official cause is still under investigation. It was impacting areas like Sonora, Jamestown, Groveland, Long Barn, Columbia, Twain Harte and other areas. Merlo notes that all 24,500 customers have now been restored. 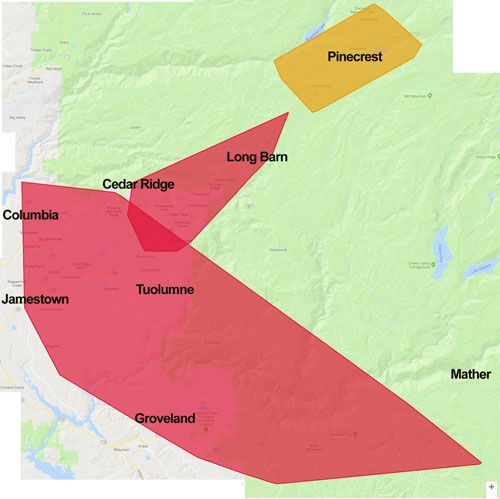