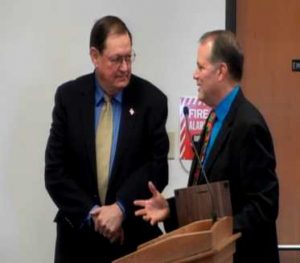 Sonora, CA — There were plenty of warm wishes, laughter and tears as today was the last regular Tuolumne County Supervisors meeting for two members.

District 2 Supervisor Randy Hanvelt and District 3 Supervisor Evan Royce said their final farewells. The latter decided not to run for a third term and Hanvelt lost in a very close race in the midterm election to challenger Ryan Campbell. Both served eight years on the board.

During his two terms on the board, Hanvelt, a retired nuclear engineer and executive for General Electric, represented District 2; encompassing Phoenix Lake and the Soulsbyville areas. When the Rim Fire struck the county he was Board Chair and it left a lasting impression on him and the issues he championed.  He was an advocate for fire safety, community resiliency, forest management and stewardship of lands. He also became a key collaborator involved on the local and state Tree Mortality Task Force, focusing on problem solving through coordinated partnerships.

A tireless networker who expanded the county’s ties at the state and federal levels, he served as the Rural County Representatives of California (RCRC) first and second Vice President and Chair of the National Association of Counties Public Lands Steering Committee during his tenure. He also testified at the House Federal Lands Subcommittee in Washington D.C. as one of five witnesses on forest health issues.

Pointing to those accomplishments, District 5 Supervisor Karl Rodefer noted, “I’m not sure if the county will ever know how much we’re losing with Supervisor Hanvelt leaving the board. His exceptional and extensive network of people that he has developed and his leadership in so many state and federal advocacy programs; we wouldn’t be where we are as a county if we didn’t have those.”

In his closing remarks, Hanvelt noted one of his mottos,  “You can’t just complain about a problem. You have to have a solution. And I implore you all to be part of the solution and not just part of the problem.” He went on to thank his peers, staff and the public for all their kind words.

Elected eight years ago at the age of 27, Evan Royce, a local construction business owner with deep local family ties, joined the board at the same time as Hanvelt. A leader on multiple local and regional committees and commissions, he was an “individual rights and pursuit of happiness defender,” known for advocating more creative and innovative solutions.  It is Royce’s straight to the point attitude that District 1 Supervisor Sherri Brennan says will be missed, stating, “He doesn’t get lost in some of the super frivolous stuff out here. He’s always thinking about the constituents of Tuolumne County. Evan bleeds Tuolumne County and we hear it all the time….he could cut right to the message.”

Declining a reelection bid to dedicate more time to his family and business Royce will cede his seat to recently elected District 3 Supervisor-elect Anaiah Kirk. With his voice quivering, Royce acknowledged, “The eight years that I’ve served here have been a tremendous honor for me and I want to thank the constituents for voting for me and giving me this opportunity because it does mean a tremendous amount.” Fighting back tears he continued, “I have many shortcomings in my life; this is an example of something that I am extremely proud of achieving.”

There were very few dry eyes in the house during their speeches, but laughter erupted later as staff told funny stories and many wonderful memories of how the two supervisors touched and enriched the lives of many through their public service.

You can hear both supervisors’ farewell speeches here: