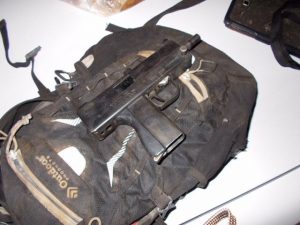 San Andreas, CA — A high-speed chase involving deputies and a motorcyclist, who turned out to be armed with a submachine gun ended with an arrest and a $125,000 bail.

According to Calaveras County sheriff’s officials, deputies attempted to initiate an enforcement stop Sunday along Highway 12 East of Toyon after seeing the motorcycle cross over double-yellow lines but the driver failed to yield and continued heading east towards San Andreas.

Officials report that a deputy continued a pursuit that at times exceeded speeds of 100 miles-per-hour onto northbound Highway 49, down Main and Center streets in Mokelumne Hill, back onto Highway 49 and eastbound Highway 26 onto Jesus Maria Road, where the rider lost control and laid the bike down.

The suspect, identified as 24-year-old Robert Simi, was uninjured and taken into custody without incident. However, officials report that a search of his backpack turned up an RPB Mac 11 fully automatic submachine gun with a high capacity magazine.

Simi is currently being held in the Calaveras County Jail for charges including felony evading and possession of illegal weapons and ammunition. Among the misdemeanors he is charged with is possession of burglary tools.