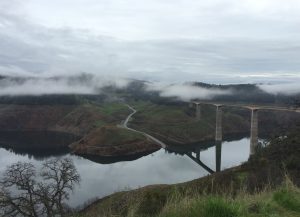 Sacramento, CA — The California Water Resources Control Board passed a plan opposed by many local leaders that will increase water flows along area rivers…but also left the door open for further negotiations with stakeholders.

The board approved a mandate to increase unimpaired flows from the Lower San Joaquin River, including its three tributaries (Merced, Stanislaus and Tuolumne rivers) to 40-percent. The increased amount of water released is designed to improve the habitat for the salmon population, but it also means less water for agriculture and municipalities. It would also limit recreation opportunities in reservoirs like New Melones, especially during drought periods.

Calaveras County Supervisor Dennis Mills, who has been monitoring the situation closely, tells Clarke Broadcasting, “This decision by the state water board will have a long-term devastating effect on the water storage on New Melones, and our ability to withstand a drought, such as the mudflat that we saw during the drought of 2015. The Interior Secretary (Ryan Zinke) personally visited here and I think that the federal government needs to complete a review of whether federal water will be used to support those flows.”

Zinke’s Interior Department submitted a letter in opposition to the state’s plan prior to the meeting. A vote on the plan was earlier scheduled for November, but it was postponed at the request of Governor Jerry Brown and his successor, Gavin Newsom. The hope was that the stakeholders impacted could hash out a voluntary agreement, and investigate other alternatives. Without buy-ins from the stakeholders, it becomes likely that the decision will spur lawsuits that could tie up the decision in court over several years to come.

Since the decision does not take effect until later next year, Board Chair Felicia Marcus encouraged the various players to continue to “come to the table” to see if a settlement can be reached, and indicated that the approved plan can be altered.

Supervisor Mills further stated his feelings, adding, “I think Governor Newsom should look to appoint a new water board, to reverse this action, while looking for the voluntary agreements of those water right-holders that are affected.”

Mills notes that opposition to the plan crosses party-lines. While many Republicans have spoken against it, a rally outside the capitol over the summer was organized by a Democratic Assemblyman, Adam Gray of Merced. Assemblyman Gray noted that its impacts will have a very negative effect on the Central Valley economy.

Environmental organizations, in support of the plan, have argued that some fish species are facing near extinction due to higher temperatures, a lack of spawning ground and dwindling water quality.