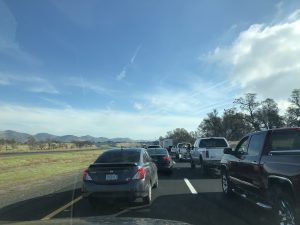 Update at 3:30 p.m.: A pileup on Highway 108 near the Green Springs Road intersection in the Keystone area has been cleared after traffic had to be diverted for several hours to clean up the wreckage. The CHP reports that a minivan, semi and SUV collided and the westbound lane was blocked causing traffic back up in both directions as can be viewed in the picture in the image box. The big rig was loaded with rocks. The collision happened just after 8 a.m. and the wreckage was not completely cleared until just before 2 p.m. The CHP tells Clarke Broadcasting that the tow truck used to remove this semi is the same one that then headed to deal with the big rig in the Highway 120 crash. Minor injuries are reported in this crash

Update at 9:55am: Traffic is now being diverted around the debris from the three vehicle wreck on Highway 108 near Green Springs Road. Officials are utilizing the highway’s shoulder to allow vehicles to pass the incident. Be prepared for continued delays in the area.

Update at 8:50am: You will want to avoid Highway 108 near Green Springs Road due to a three vehicle crash. A heavy amount of debris is on the highway so officials are planning to close the highway, in both directions, for the time being, and set up a detour. It is best to avoid Highway 108 near Green Springs Road if possible. It is unclear how long the cleanup will take.

Original story posted at 8:15am: Sonora, CA — Be prepared for activity on Highway 108 near the intersection of Green Springs Road.

The CHP reports there is a three vehicle crash involving a semi-truck, van and SUV. No injuries have immediately been reported, and the CHP indicates that everyone involved is out and walking around. The crash occurred in the westbound lane. Travel with caution in the area.