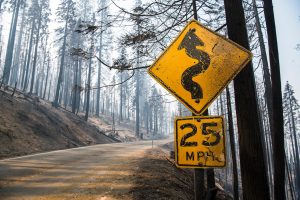 Mariposa County, CA — Visitors are now allowed to travel into the area burned by the 96,000 acre Ferguson Fire.

The fire ignited on July 13 near Savage’s Trading Post, and the Sierra National Forest reports that thanks to the recent rainfall, the fire is completely extinguished. An earlier Forest Order that banned travel into the fire area has now been lifted.

Anyone traveling near the burn area is still advised to use extreme caution due to hazard trees near roadways.

We reported earlier that the fire was caused by a hot catalytic converter on a vehicle. The person, and vehicle, responsible, however, was not located. The fire sadly resulted in the death of two firefighters, Braden Varney and Brian Hughes. In addition, 19 people sustained injuries and 10 structures were destroyed. It prompted an extended closure of much of Yosemite National Park.