Passes To Remain Closed Ahead Of Next Weather System 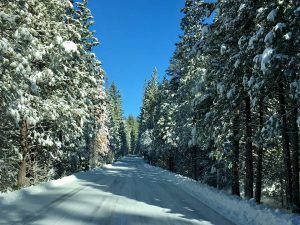 Taking a look at some of the totals from last week’s storm event…the Tuolumne Utilities District reports that three inches of rain was recorded at its Sonora weather station, and Dodge Ridge Ski resort received 24 inches of snow at its summit and six inches at the base. Dodge Ridge has not yet announced a tentative opening date. Meanwhile, Bear Valley Ski resort opened this past weekend just for tubing and beginning ski lessons.

The local mountain passes were closed ahead of the storm system. Caltrans spokesperson Thomas Lawrence says, “There is snow on both Sonora and Ebbetts passes, and there are incoming storms projected to come in as well, so both are scheduled to remain closed for the time being, and it is weather dependent as to when they are going to open.”

The same goes for Highway 120 Tioga Pass in Yosemite National Park. The wet weather is expected to move back in tomorrow with 2-3 inches of additional rain expected this week in the foothills and snow at the higher elevations.

You can find the latest forecast in the myMotherLode.com weather section.