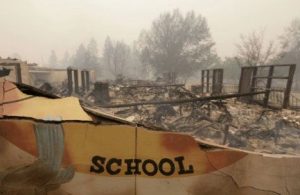 Paradise Elementary School burned to the ground in Camp Fire

Update at 5:40pm: U.S. Interior Secretary Ryan Zinke, back in Paradise, estimates that associated costs of California’s deadliest wildfire yet will likely add up to billions.

Returning Monday to the completely devastated town, Zinke shared that there are a lot of things he would rather spend federal money on rather than repairing damage of things that have been destroyed, such as improving visitor experiences at Yosemite National Park or thinning forests.

So far, FEMA officials say the U.S. government has distributed more than $20 million in assistance for people displaced by Butte County’s Camp Fire. The bulk of the dollars have been spent on short-term housing assistance, including hotel room vouchers, although about $5 million has covered other needs, including funeral expenses. The count of those still missing on Monday afternoon was described as being in the high 200s.

Original Post at 7:26am: Paradise, CA — Several inches of rain helped to knock down the flames, and stop the spread, of the deadly Camp Fire in Butte County.

The fire, which ignited on November 8, has destroyed around 14,000 homes and resulted in at least 85 deaths. The Butte County Sheriff’s Office reports that 296 people are still unaccounted for, and officials are sifting through the ashes for more human remains. Thousands of displaced people are living in shelters, campgrounds and hotels.

Around 1,000 firefighters are still assigned to the 153,000 acre blaze. Later today US Agriculture Secretary Sonny Perdue and Interior Secretary Ryan Zinke will be in paradise to speak with firefighters working to stabilize the area, and to meet with local community leaders.

We reported last week that both are requesting additional authority from Congress to implement strategies they say will improve the health of forested areas.