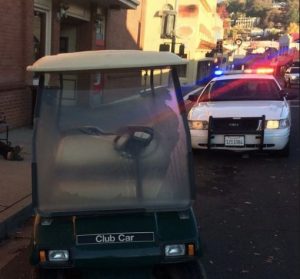 Sonora, CA — There was an odd scene in downtown Sonora early Sunday morning.

The Police Department dispatch received a report at 7:50am that a man was driving a golf cart down Washington Street and he was reportedly weaving in and out of traffic. An officer spotted the man and pulled him over near the intersection of Stockton Road. Eric Freemon, identified as a 32-year-old transient from Sonora, allegedly stole the golf cart from a business in Columbia and drove it to Sonora. He was arrested for Grand Theft and booked into Tuolumne County Jail. The PD notes that Freemon was not under the influence of alcohol or drugs.