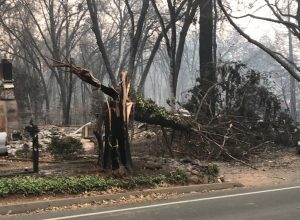 Sacramento, CA — The state’s deadly wildfires have prompted lawmakers to draft a second bill to protect California utilities from possible bankruptcy over potentially billions in liability costs – a loophole in the first bill left the utilities vulnerable.

The Associated Press attributed the San Jose Mercury News for reporting on Tuesday that Los Angeles area Democratic Assemblyman Chris Holden plans to introduce a measure allowing Pacific Gas & Electric (PG&E) and other utilities to pass onto customers some costs related to this year’s wildfires. As earlier reported here, the governor signed a major wildfire bill in September of this year that allows utilities to bill their customers to pay for legal settlements after the destructive 2017 wildfires. However, that bill, drawn up in the wake of devastating Wine Country fires, had a loophole that didn’t cover 2018, sparking the need for this additional measure.

Several reports have speculated and some lawsuits allege that PG&E equipment sparked this month’s deadly Camp Fire in Northern California. As the death toll continues to rise to date 81 people have died and 13,000 homes have burned to the ground.

PG&E has not commented on the new bill but has stated that right now its focus is on helping customers recover. Additionally, Southern California Edison has been sued by victims of a devastating southern fire.