Snoozing Behind The Wheel Lands Sonora Woman Behind Bars 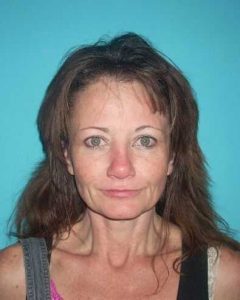 Tuolumne, CA – A Sonora woman was surprised by a Tuolumne County Deputy who awoke her after responding to residents 911 calls regarding a suspicious vehicle parked along the roadway.

The vehicle was discovered by the deputy on a shoulder of Mira Monte Road in Tuolumne and behind the wheel of the vehicle was a sleeping 48-year-old Cheryl Joleen Brandsted. A records check found she was on searchable probation. Before a search of the car, Brandsted admitted to having syringes.

Subsequently, a search of the vehicle and her purse uncovered methamphetamine, suspected heroin and prescription pills without a pill bottle. The deputy also discovered two weapons: pepper spray and an ax handle with the ax sawed off the top, which Bransted’s probation prohibits as she has multiple felony convictions.

Brandsted was charged with two felonies that including possession of a manufactured weapon and tear gas. She was also charged with several misdemeanor drug charges. Her bail was set at $20,000.