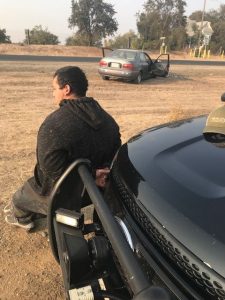 Angels Camp, CA — Two men robbed the CVS Pharmacy in Angels Camp, and one of them was later captured following a high speed chase.

The Calaveras County Sheriff’s Office received a phoned in report yesterday afternoon about two Hispanic men, wearing hooded sweatshirts and baseball caps, loitering around the store. The men then allegedly jumped behind the pharmacy counter, took medications, and fled.  Witnesses relayed a description of the getaway vehicle to the officials, and the two responding sheriff’s deputies spotted the car as it was leaving the area.

The suspects refused to pull over, and the sheriff’s office checked the license plates and determined the gray Honda had been stolen out of Lodi. When the vehicle arrived in San Andreas, the California Highway Patrol took over the pursuit. Eventually the car was stopped, thanks to spike strips placed on the road on Highway 12 in Clements. One of the men was immediately captured and arrested.  30-year-old Ricardo Vasquez-Moreno of Lodi was charged with robbery, criminal conspiracy and vehicle theft. The second suspect fled into a nearby orchard and is still at-large. Anyone with information regarding the case is asked to call the Angels Camp Police Department at 209-736-2567.