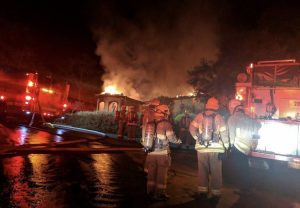 Update at 8am: The Tuolumne County Sheriff’s Office reports that three residents were at the home in the 11900 block of Appey Way when the fire erupted during the eight o’clock hour last night. Everyone escaped safely, and nearby neighbors were notified, but no additional evacuations were needed. The fire completely destroyed the home. The cause of the blaze remains under investigation.

Original story posted at 6:15am: Sonora, CA — A two story home was destroyed by fire last night in the 11000 block of Appey Way in the Cuesta Serena area outside of Sonora.

It was called into dispatch shortly after 8 o’clock and no injuries were reported. What ignited the fire remains unknown. It was a larger house, estimated to be between 3,500 – 4,000 sq. ft., and considered a total loss. Agencies on scene included CAL Fire, Tuolumne County Fire, Twain Harte Fire, Altaville Melones Fire, Tuolumne County Sheriff and PG&E.

CAL Fire spokesperson Lindy Shoff says it was contained at 12:05am and fully controlled at 1:46am.