A Nail Biter And An End To The Season 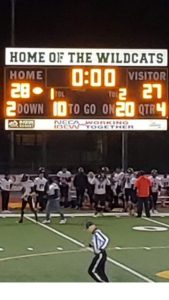 Scoreboard final as Sonora beats Foothill in a nail bitter

Sonora, CA — On a perfect playoff football night, the Sonora Wildcats pulled out a late score to win 28-27 over the Foothill Mustangs.

In the first quarter, both teams’ defenses were the story. Foothill got the ball first and the Wildcats defense shut them down after three plays. Then, as Sonora was moving the ball in its first offensive drive, suddenly a fumble and a Foothill player fell on the ball. The Mustangs William Goebell broke the scoring drought, rushing from 13 yards out and with the extra point Foothill would take a 7-0 lead to the end of the first quarter.

The second quarter saw Foothill’s Goebell score again plunging in from 1 yard out to cap a Mustang drive, but the Wildcats would block the point after and hand the lead over Sonora, 13-0. The Wildcats would open up their scoring when Elijah MacDonald rushed from 4 yards out and Bryan Wynne sailed the pigskin through the uprights, cutting the lead to 13-7. Wynne would continue his pick streak grabbing an interception in the second quarter. Foothill’s slippery Quarterback Goebell would find the end zone again with a 17 yard run and Traivion Drummer would haul in a fake point after to add two more points and the Mustangs extended their lead 21-7 going into halftime.

As the two teams came out of the locker room after halftime, you could feel the calm determination in the Sonora High Wildcats without any sense that they were not still in this football game. As the second half started, Sonora’s Wide Receivers Karson Clifton would take the lead and help to drive the ball down the field. He made it into the end zone early in the third quarter on a 21 yard run with Wynne adding the extra point. Foothills lead was cut to a seven points with the scoreboard reading 21-14. Goebell would again tack on more points for the Mustangs, this time hitting the end zone from 17 yards out, but once again the Wildcats blocked the extra point leaving the score at 27-14. Sonora’s Clifton would break another run lose for 27 yards and Wynne would tack on the point after and the lead was cut again, Foothill 27 Sonora 21.

As the fourth quarter started, Sonora’s defense would continue to shut down the Foothill rushing attack. Tristan Hagstrom would fall on a Mustang fumble and give the Cats the ball back with about five minutes left in the game. As the Wildcats took the ball and moved down the field, the Cats came to third down. As Wildcat’s Quarterback Jake Gookin looked over the defense, he spotted a mismatch to his left side. At the snap, Gookin would drop back and throw the ball up to Wide Receiver Evan Bearden who leaped up and snatch the ball away from the Foothill defender for six points to tie.  Wynne would tack on yet another extra point and the Wildcats took their first lead of the game.

Foothill would get the ball back one last time and start their march toward the end zone. The Mustangs took the ball down to the half yard line where it was first and goal. The first play would go for no gain and it was second and goal from the half yard line. Back to back penalties put the Mustangs back to the 11 yard line where it would be second and goal with :38 seconds left. At the snap, Foothills QB would drop back and throw to his left. As the ball was in the air, Wynne would play perfect pass defense, sitting down underneath the recover and not allow that offensive player to have any chance of a catch. Instead, Wynne hauled in his second interception of the game in the end zone and sealed the victory for the Sonora Wildcats.  Gookin would take two snaps and kneel on the ball and run the clock out giving the Cats the victory (28-27)  in what is one of the most exciting finishes in recent memory.

Unfortunately, Calaveras High (7-4) did not fare as well in its match up against Escalon (8-2), losing 15 to 39 and ending the teams run.