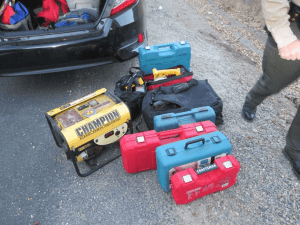 Sonora, CA — Although it was early in the a.m., it was still dark enough to require headlights so deputies curious to see a black sedan traveling without them decided a safety check was in order. It turned out netting two arrests tied to a rash of recent burglaries.

According to Tuolumne County Sheriff’s spokesperson Sgt. Andrea Benson, the stop was made earlier this week on Highway 108 at Via Este Road in Sonora. As a deputy approached the back Honda Civic, he could readily see that the backseat was brimming with power tools. A records check of the driver, 30-year-old Jesse Grenland, and passenger, 30-year-old Joshua Hobbs, revealed they were on searchable probation. Following a vehicle search, investigators determined the Honda Civic was stolen. Grenland and Hobbs were arrested and booked into the Tuolumne County Jail for vehicle theft and violating probation. Hobbs was additionally charged with committing a felony while out on bail.

Benson shares that the sheriff’s office has recently received several calls relating to residential burglaries in the Sonora and Soulsbyville area, specifically reporting thefts of power tools. Called to examine the recovered tools from the Honda Civic, the victims were able to positively identify their property. One of them was even able to provide surveillance video of the men at the residence.

In the wake of these case developments, Grenland and Hobbs now additionally face related burglary charges. Benson adds that the victims were promptly reunited with their belongings.