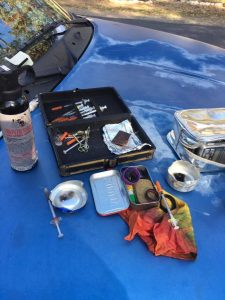 Sonora, CA — A vehicle parked in front of a home on Via Este Road in Sonora with two men inside aroused a neighbor’s suspicion – who placed a call to 911.

When a Tuolumne County Deputy pulled up to the house he found 27-year-old Kody Ingram of Jamestown behind the wheel and passenger, 29-year-old Daniel Simpers of Twain Harte in the front passenger seat. The deputy ran a records check which revealed that Ingram was on searchable parole.  During questioning, the deputy could see drug paraphernalia inside the vehicle and asked the men if there were any illegal items inside the vehicle. The pair admitted there was.

That prompted a search of the truck which turned up over four grams of heroin, methamphetamine, digital scales, multiple small plastic baggies and several hypodermic needles. One of the needles was also filed with heroin.

Ingram and Simpers were arrested on several felony related drug charges including intent to sell.