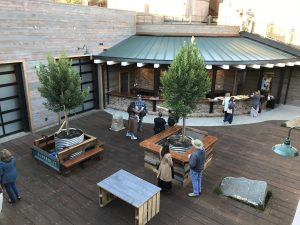 Sonora, CA — The developer of the new Sonora Armory entertainment venue and beer garden has some positive news regarding his project’s future.

There had been questions swirling about how long the newly constructed facility would sit prior to opening after developer Doug Kennedy publicly stated a desire to sell it.  Kennedy was on hand this morning at the site to give a tour to a variety of local business leaders. The Armory has space for a full bar, restaurant, outdoor seating area and many other amenities. The plan is to also stage live entertainment, with the potential to have 300 people indoors and 800 total when utilizing the outdoor space.

Afterwards, Kennedy told Clarke Broadcasting, “What I will commit to you is that it will open, whether it’s by me opening it up, or a new investor or partner coming in.  It’s really just a time thing at this point with myself.”

Kennedy has been spending more hours out of California tending to other business interests.

As for when it may open, he added, “There are no timelines right now. You get one shot at opening up and doing it right and effectively. We’re going to make sure that we’re fully set up with the right staff, right menu, and to ensure that people come in the first time and get the best experience possible.”

As for potential partners coming on board, he stated, “We’re in talks with a few different groups.”

Concluding, he said, “We’re happy to be at the stage we’re at right now, and just ready to get people excited again about what we’re doing down here.”

Around 50 people were on hand for today’s tour, which was a chance to give the community an update, and build momentum for its eventual opening.