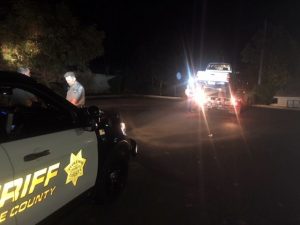 Sonora, CA – Deputies discovered what turned out to be a hot truck full of stolen property and arrested its occupants.

According to Tuolumne county sheriff’s officials, in the early hours Sunday a deputy patrolling in Jamestown received a bulletin regarding an East Sonora incident regarding a purse allegedly stolen out of a parked car. He also heard that suspects in a silver Toyota truck were heading west towards him.

Spotted on Highway 108 near 5th Avenue, the driver saw the deputy’s vehicle, sped off and attempted to hide in a parking lot on Donovan Street. However, the truck was located and the deputy detained 28-year-old Kristen Chapman. Shortly afterwards, a CHP officer who responded to assist, found 40-year-old Jeremy Chapman nearby. Both are listed as residents of Lodi.

It turns out, not only was the pickup stolen out of Roseville, during a truck search deputies found the stolen purse, which was later returned to its owner. Officials say that more stolen items additionally recovered tie the Chapmans to several vehicle burglary cases, including one reported to the Sonora Police Department. Officials add that owners are receiving their stolen property as the case investigation continues.

The Chapmans face charges of felony burglary, receiving stolen property and conspiracy to commit a crime as well as misdemeanors of possessing burglary tools and drug paraphernalia. He was additionally charged with violating his probation and remains on a no bail hold; she was assigned a $15,000 bond.